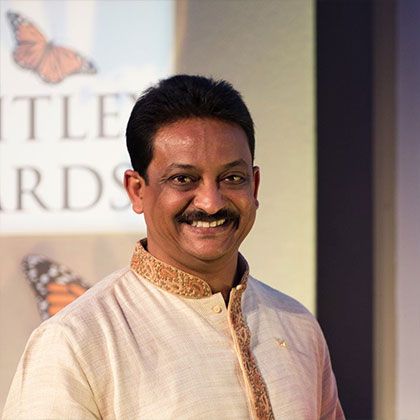 Sanjay Gubbi holds a Master's Degree in Conservation Biology from DICE University of Kent, UK where he received the Maurice Swingland Award for the best postgraduate student of the year. His dissertation from the M.Sc won two major international awards. He is the recipient of Carl Zeiss Wildlife Conservation Award for 2011.

He works on protection of tigers and other wildlife in the Western Ghats of Karnataka which has resulted in several successes in the state including closure of night traffic of highways in Bandipur and Nagarahole National Parks, halting of the mine at Kudremukh, expansion of Anshi-Dandeli, Bandipur Tiger Reserves and more recently several other protected areas. He was instrumental in the establishment of a new wildlife sanctuary at Rangayyanadurga for the four-horned antelope in Davanagere district. Gubbi also works towards the institution of new social security and welfare measures for forest watchers and guards serving in Karnataka’s protected areas.

His other strength includes his work with a wide cross-section of people including policy makers, media and social leaders on the need for wildlife conservation. He has published scientific papers on conservation policies in leading international journals. He has extensively authored about conservation in the popular print media, and is especially keen on fostering good writing about wildlife in local languages. Apart from the several popular articles in English and Kannada, he has authored Vanyajeevigala jaadu hididu (On the Wildlife Trail), a book in Kannada, and co-edited another one, Vanyajeevigala ramyaloka (The Delightful World of Wildlife).

Recognising his efforts the Karnataka State Government has appointed him as the Member of the State Wildlife Advisory Board chaired by the Chief Minister, State Tiger Conservation Steering Committee, Governing Council of Tiger Foundations of Karnataka and several other important committees. He is one of the few in the country with a scientific background and a strong understanding of the socio-economic and political aspects of wildlife conservation.

One of his important contributions includes motivating and guiding younger generation to work and contribute towards wildlife conservation.

Sanjay Gubbi made india proud when he became the recipient of the 2017 Whitley Award (aka Green Oscar). He is the author of Second Nature: Saving Tiger landscape in the 21st Century.

He is particularly interested in popularizing wildlife science and conservation in local languages. He currently works with the Nature Conservation Foundation under the Western Ghats programme.